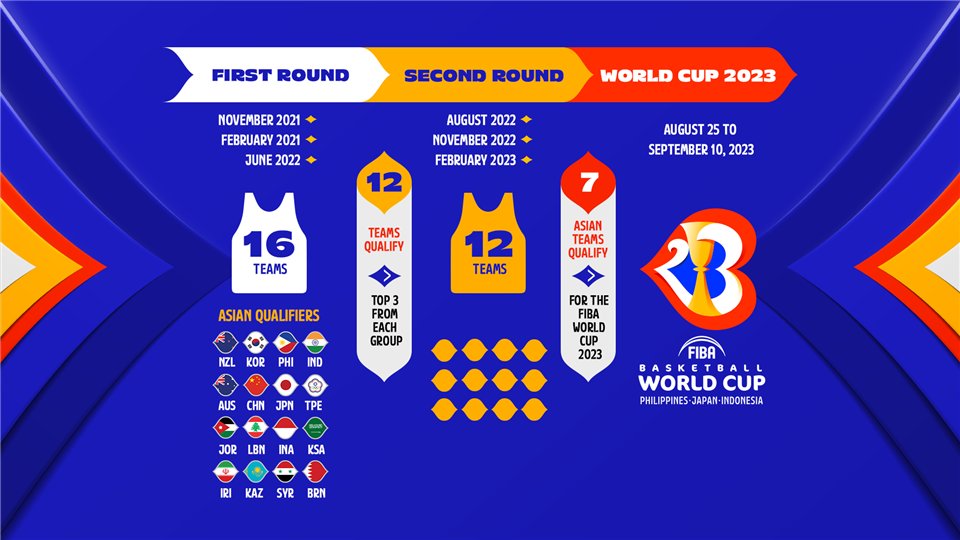 The 16 teams from Asia and Oceania will play the FIBA Basketball World Cup Asian Qualifiers during six windows.

Japan is also qualified as host in virtue of its ranking, but takes up one of the available seven spots for Asia at the event.

The Philippines and Japan will play in the FIBA Basketball World Cup Asian Qualifiers First Round and Second Round, advancing to the next phase as automatically qualified. Indonesia’s guaranteed spot is subject to reaching the Quarter Finals of the FIBA Asia Cup. Six spots are therefore available for the remaining teams.

In the First Round, the 16 teams will be divided into four groups (A-D) of four. Each team will face the other three teams in their group on a home-and-away basis over the first three windows. Each team will play two games in each window. These windows will be in November 2021, February 2022 and June 2022.

The top three teams from each group will advance to the Second Round of the Asian Qualifiers. This group will join another three teams to form another group. Prequalified host teams Japan and the Philippines will take up one of the three spots in the group, regardless of their position within their group.

All teams will carry over the results from the First Round.

In the Second Round, each team will play home-and-away against the three teams from the other group over the final three windows. The Second Round windows will take place in August 2022, November 2022 and February 2023. Each team will play two games in each window. At the end of these additional six games per team, the top three teams in addition to the Philippines and Japan from each group will qualify to the FIBA Basketball World Cup 2023. Should Indonesia also be guaranteed a spot, then only the best third placed team would qualify in addition to the top two placed teams from each group.

With the Asian Qualifiers running from November 2021 to February 2023 - and national sides playing home and away games across each of these event windows - This ensures there's regular and competitive national team games for players to play and for fans to experience from all around the world.

How did teams make it to the Asian Qualifiers?

The 16 teams participating in the FIBA Basketball World Cup 2023 Asian Qualifiers are the 16 teams that will compete at the FIBA Asia Cup 2021.