BEIJING (China) - A year has passed since Spain climbed the top step of the podium at the FIBA Basketball World Cup 2019. The mastermind of the success, coach Sergio Scariolo, has had a busy schedule of late, but he was more than happy to talk about all the players who helped the team make history.

Flying back home from the NBA Bubble, Scariolo, also on the Toronto Raptors coaching staff, sounded like he was in a good mood. Even though, the entire world changed since last year's global get-together in China and he was clearly facing these changes during this interview - you could hear the warnings to wear the mask as a part of the airport noise in the background.

"As you know, a certain amount of time can seem either short or long. It's been one year since the World Cup in China, but it really feels like a century passed," Scariolo told FIBA.basketball.

"But an anniversary like this one is a great opportunity for us to go back to basketball as it was, to the great atmosphere and the crowds we had during the entire World Cup. Especially in moments like this one, right now, when the whole world changed."

Instead of talking for hours about the game plans and the tactical adjustments, we decided to approach this differently. We asked Coach Scariolo to talk us through the entire gold-medal winning team, from Quino Colom to Juancho Hernangomez, and their significance to the victorious campaign.

In basketball, and sports in general, it's always the coaches' fault when you lose. But when you win, the coaches rarely get the credit they deserve. However, that was certainly not the case at the FIBA Basketball World Cup 2019, with Scariolo dominating his colleagues in China and being recognized for his remarkable job on the sidelines.

Scariolo's offense has always been on point, but at the World Cup, it was his team's defense that was an enigma for all the opponents, with a steady dose of man-to-man defense, 3-2 zone with Rudy Fernandez as the main figure in the front line, and a lot of other tricks that kept other teams guessing all the time.

"I don't think so. It probably was the most rewarding, both with the national team and with the Toronto Raptors, but I feel like my help to many different teams was more important over the course of my career. Sometimes you get rewarded. But sometimes you face more difficulties in other situations and you have to figure it out," the playcaller said.

Spain were supposed to challenge for another gold in 2020, with the Olympic Games set as their next goal; the COVID-19 pandemic postponed the plans for at least another year.

"We had great expectations from the Olympics. But after everything that had happened, I can say at this point that we only hope we will be able to compete at the Olympics. We hope that the situation in other competitions around the world, starting from my own in the NBA, will be clear enough and make enough room to allow coaches and players to participate at the Games, and also to have a decent time for the preparations before the Olympics. Now is more of a time for hopes rather than certainties. Keep our fingers crossed that we'll be able to have another great competition in Tokyo," Scariolo finished. 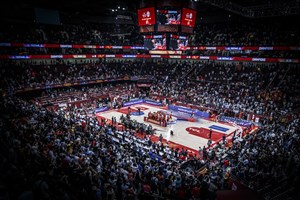 FIBA Basketball World Cup 2019 anniversary: Moments to remember, from A to Z