BEIJING (China) - The first six teams to qualify for the Second Round of the FIBA Basketball World Cup 2019 were confirmed, with Argentina, Italy, Poland, Russia, Serbia and Spain booking early-bird tickets on action-packed Monday night.

For all six nations, advancing to the next phase of the competition came with added gratification of clinching places in next year's Olympic Qualifying Tournament ahead of Tokyo 2020.

A down-to-the-wire overtime thriller in Beijing was at the epicenter of all the drama, with Poland snatching a 79-76 victory against the tournament hosts China behind Mateusz Ponitka's late-game heroics to confirm the top spot in Group A with a game to spare.

The result leaves the tournament hosts China in a direct battle for second place in the standings with Venezuela, who defeated Cote d'Ivoire 87-71 in the group's other fixture on Monday to pick up their first win of the tournament.

Argentina moved to 2-0 by holding off Nigeria in a 94-81 contest with Scola collecting 23 points and 10 rebounds on a historic night, while Russia defeated Korea 87-73 to send both of the undefeated teams to the Second Round.

In Group C, Spain had to work hard but eventually got over the hump against Puerto Rico 73-63 for their second victory of the campaign in Guangzhou. Marc Gasol made his impact felt with 19 points and 7 rebounds, while Ricky Rubio impressed with a 17-point, 8-rebound and 4-assist performance.

Despite losing to the group favorites, Puerto Rico still have everything in their hands before the final showdown with Tunisia on Wednesday. The winner will join Spain through to the Second Round as a second seed.

Meanwhile, Italy and Serbia wasted no time in confirming their place in the next round in Group D, scoring another set of blowout victories in Foshan. The Azzurri cruised past Angola 92-61, while Serbia rocked Philippines with an even larger margin, 126-67.

The teams from Groups A and B will travel to Foshan for the Second Round to form Group I, while the winners of Groups C and D will gather in Wuhan in a newly-formed Group J.  The groups will go on to cross paths in the Quarter-Finals. 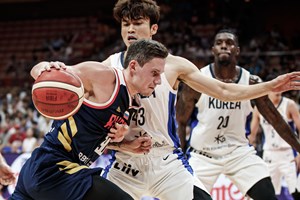 The Three Musketeers: Papanikolaou, Sloukas and Mantzaris have unfinished business for Greece 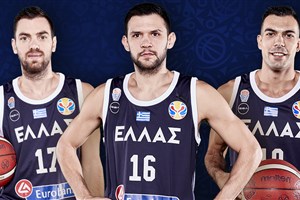