MIES (Switzerland) - Shaquille O'Neal was a very big man who always made a very big impact. That was true throughout his career, including at the beginning when, at the age of 22, he was a star attraction in the USA team at the FIBA Basketball World Cup 1994.

As part of our Classic Games Flashback series, the 1994 Final in Toronto was the stage for the man known as "Shaq", or "The Diesel", to put an exclamation mark on his dominant showing at the tournament.

He dunked his way to 18 points and also corralled 10 rebounds as the United States overpowered Russia, 137-91.

The USA marched to the title with resounding victories over Spain, China, Brazil, Australia, Puerto Rico, Russia and Greece before defeating Russia a second time in the title game.

O'Neal, who was recently inducted into the FIBA Hall of Fame, ended up leading the Americans in scoring at 18 points per game and was named as the Most Valuable Player of the tournament.

Joining him in the All-Star Five were Americans Reggie Miller and Shawn Kemp, Russia's Sergei Bazarevich and Croatia's Dino Radja.

This is the first installment our our Classic Game Series with others coming every week, all the way up to the start of the first-ever 32 team FIBA Basketball World Cup in China at the end of August.

The full FIBA Basketball World Cup 1994 Final between USA and Russia will be streamed at 9PM CEST (GMT+2) on Thursday on FIBA's Facebook and YouTube channels. 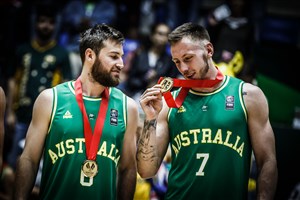 Just 50 days to go: Test your World Cup knowledge in our toughest quiz to date