Asia Cup Expert Opinions: Are the Saudi Swatters a lock to qualify?

Saudi Arabia are currently at 3rd place in Group E with a 2-2 record (falling behind the 2-2 Syria national team on a tiebreaker).

We checked in with our experienced experts/commentators Jeff Taylor and Josh Bett for their insights about Saudi Arabia. Jeff has been a journalist since 1990 and has been covering the international basketball scene since 1996, so his insights are results of experience accumulated over decades. Josh is a multilingual rising star as an international basketball commentator who is ready to hype up any exciting plays to the max.

Saudi Arabia have claimed big wins and suffered painful losses, resulting in their current 2-2 record. What are you impressions so far of this energetic team? 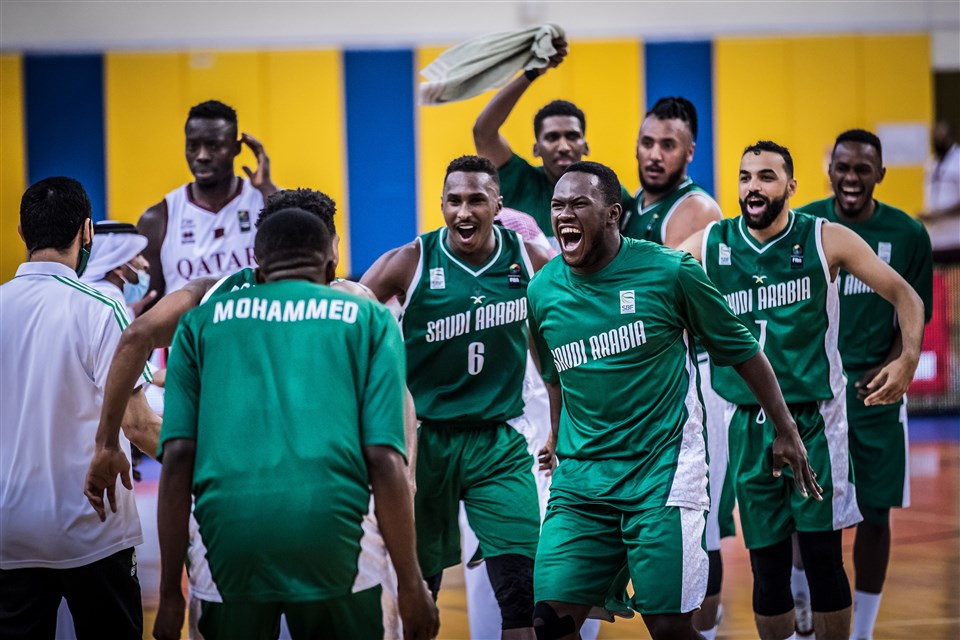 JT: For a team that hasn’t showed up at the party since 2013 (when they last showed up at the FIBA Asia Cup and finished 13th out of 15 teams - ahead of only Thailand and Malaysia), the results and performances have been good. They’re fun to watch, especially when they get into transition. And what I love about these players is how they have been taught to make the bounce pass.

JB: Saudi Arabia have a lot of potential due to the individual talent in the team. They are very quick in transition and very physical in the low post.

How far do you see them soaring through the competition this year?

JT: There are some talents in this team and this is born out by how competitive they’ve been. It’s a shame we didn’t see them in the last window because I was curious if they might take it up a notch and play even better than they have so far. I don’t want to put the cart before the horse and say they can get as far as the Quarter-Finals of the Asia Cup because, first, they have to get there.

Yet I will say that right now, they will claim one of the spots from the additional qualifying tournament for third-place teams and have a chance to advance from the Group Phase.

JB: They have been impressive in the Qualifiers with their high tempo and ability to play very physically. Saudi Arabia are currently in 3rd place in Group E just behind Syria and I believe they can turn it up and beat Syria by more than 5 points to win the head-to-head tiebreaker. Their peak potential for the Qualifiers will be to finish 2nd just behind Iran.

However, at the Asia Cup, they must aim to finish either 1st or 2nd to get out of the group stage in the first round.

JT: Everything, but what team doesn’t need to keep improving? The main thing that stands out is that Saudi Arabia need to cut down on their turnovers because they have gifted a lot of points in all four of their games so far.

JB: They need to be more consistent shooting the three point shot because 22 percent does not represent their ability to shoot but more their shot selection. If they can learn to develop their offense that allows them to create higher percentage shots, then I believe their three point percentage will improve. This will not only improve their perimeter shooting but their offense collectively. They are an exciting team to watch for their impressive individual talent, and if they can build their talent as one unit, then they will be extremely tough to beat.

Both of you have been praising the individual talent on this squad. Who stands out the most so far as Saudi Arabia’s star?

JT: Basketball is a team game and Saudi Arabia’s guards have been sensational at times, yet the overall production and minutes of Mohamed Alsuwailem can’t be ignored. He’s a rebound shy of having three double-doubles in four games and his 19.3 average efficiency is not only tops on the team but tied for third overall in the Qualifiers. He impacts games with his ability to protect the rim and also to run the floor.

As his 31.8 minutes per game are third most on the team, there are moments when he looks tired so his conditioning could be a little better and he has to be ready to pass the ball out of trouble when double-teamed or surrounded by defenders in the low post.

But overall he’s crucial for this team. 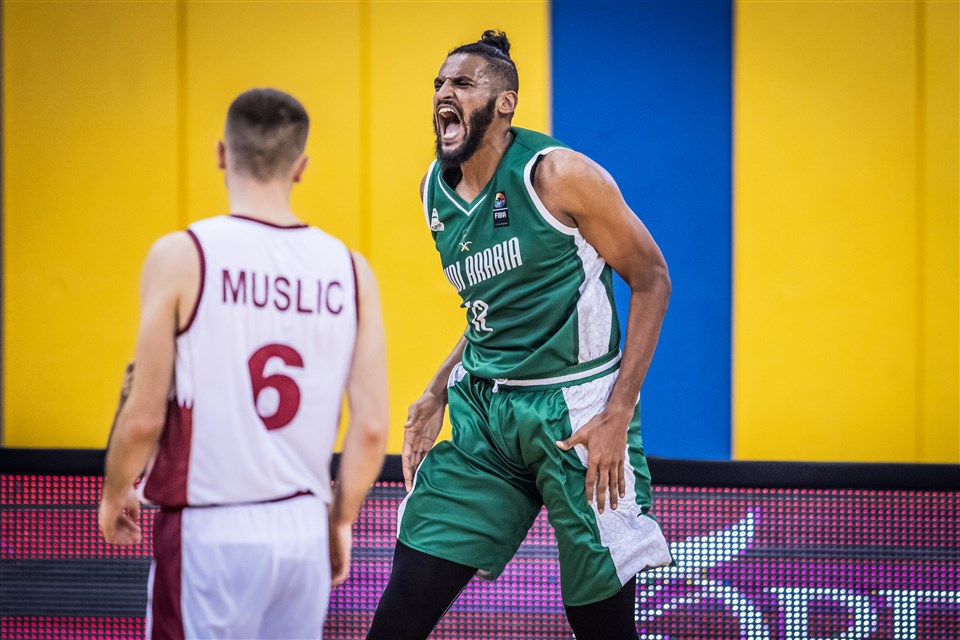 JB: Khalid Abdel Gabar is the key player in the backcourt for Saudi Arabia. He is very fearless and will hold nothing back in any man-to-man match up. In the game where Saudi Arabia lost to Iran (who are arguably a top four team in the Qualifiers), he wasn’t too far away from getting a triple-double in that game with 13 points 5 rebounds and 4 assists. You could argue that was not his best performance, but those are still very good stats to put up.

Saudi Arabia are also a surprisingly deep team as well. Which player on this team do you feel can be a surprising key contributor down the road?

JT: Ali Shubayli! Get him some more minutes. 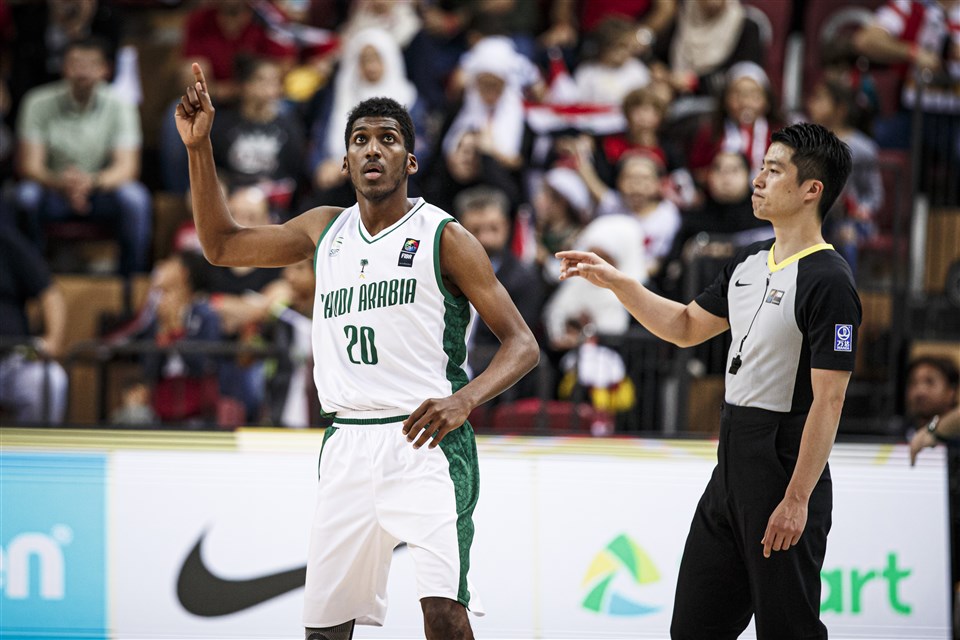 JB: This team thrives on high energy, physicality, and individual talent. I have really enjoyed watching Mohammed Alsuwailem who is a solid post player. I think he needs to be credited for how hard he works but also how well he runs the floor in transition for his position. I also believe that if Saudi Arabia try to set more plays to allow him to isolate a back down post play, then he will be a problem for other teams to defend.

Saudi Arabia games throughout the Qualifiers have been up-tempo and entertaining, which makes it great for commentators like yourselves. What has been your favorite moments calling games they’ve played in?

JT: I haven’t done any yet but I loved the rim-rocking slam dunk by Mohamed Alsuwailem, when he hung on the rim in the first quarter of the game against Iran. Also in the final minute of the first half against Iran, Ali Shubayli hit that incredible shot from behind the backboard and in the right corner as the shotclock expired.

JB: My favourite moment was against Iran when Alsuwailem ran the floor and was rewarded with a monster two handed “Throw Down” [as Jeff mentioned above]. Those are the kind of plays that get the fans excited. Most players like the baskets to come easy for them, but that moment exemplified their style of play. Work hard, play with passion, and never give up.

As a team on the rise like Saudi Arabia, we seem to be lacking a lot of fun nicknames and monikers to refer to the players. Fire away with your best ideas!

JT: You can almost see it coming, when Khalid M Abdel Gabar pulls up on the break and let’s it fly, or ends up with the ball in his hands with the shot clock winding down …

“And that’s another three, from ABDEL GABAR, I shoot it from so far”.

I like him. He has two speeds, fast and faster, and my nickname for him is Sheik Rebound and Run.

Also, when you see Mohammed Almarwani catch the ball in the low post and turn into the lane before putting up that unstoppable hook shot, he becomes “The Captain” - short for Captain Hook.

JB: Abdel Gabar for me is a warrior, I think the “Arabian Knight” would best personify his fearless approach to compete. 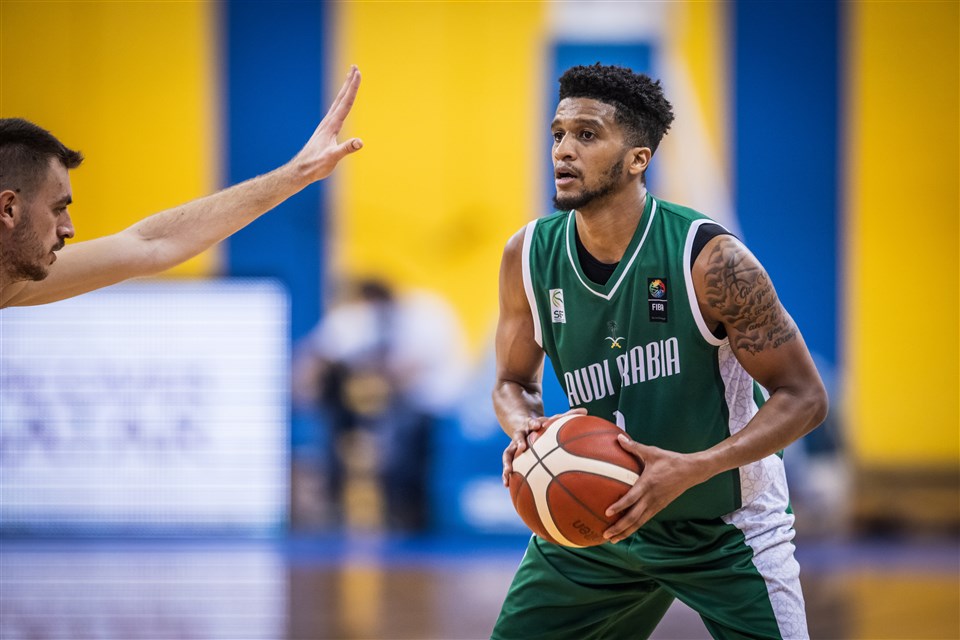 How about a fun catchy nickname for the team as a whole? We’ve sometimes referred to Saudi Arabia as the Mean Green Machine, but we want to hear your creative ideas as well.

JT: The Saudi Swatters - their average of 4.5 blocks per game ranks No. 1 in the FIBA Asia Cup 2021 Qualifiers.

JB: I like The Green Machine as nickname and I also thought that with the exciting individual talent on this team they could also be looked at as the KSAvengers. 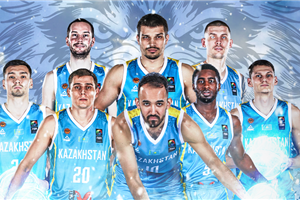 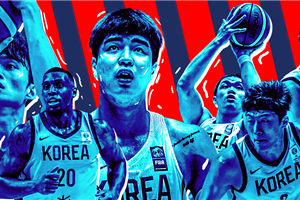 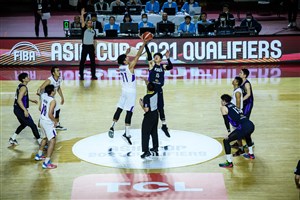